A growing, thought-provoking place to help you create your life, your way
MENUMENU 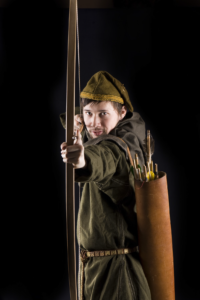 It’s satisfying to hit a target. I‘m not even talking figuratively; one of my hobbies is archery, and there’s a satisfaction in hearing the thunk of an arrow hitting the boss a second after you’ve loosed. As you’d expect, when I returned to it as an activity after a forty year hiatus, as much as I absorbed the lessons of my coach about holding the bow, nocking the arrow, and all the little things to do with making a successful shot, I very quickly began studying the mental aspects of it as well. One of the fascinations of archery is the difficulty in replicating a result. It doesn’t matter that you shot a bull with the last arrow, it doesn’t make it any less likely that you could completely miss with the next, so absorbing yourself in the moment of each shot is really quite meditative. And that’s been recognised for hundreds of years – especially in the East, where archery has a spiritual element to it that’s missing from Robin Hood. Although I expect he’d have recognised it if he heard it spoken about, it’s probably just that he was British, so kept it to himself in case Little John laughed at him and called him a cissy.

So when I began to read about the ‘inner game’ of archery I found a lot of familiar territory – about the need to get out of your own way, to leave your body to do what it knows how to, to let go of the intention. All good ‘mind coaching’ stuff. But a visualisation I came across which I found both useful for hitting the target, also seemed to me to have a much wider application in life. It’s very simple: Before you begin to draw the bow, set yourself in the position you’ll adopt in relation to the target, look at it, and then imagine the arrow already in the gold. See the arrow, and imagine it connected to your bow. Then go through your sequence for drawing and shooting the arrow, keeping the idea that your arrow has already hit the target. See it there before you lose the shot. All you’re asking your body/unconscious to do is make that come true.

The first thing to do is gain clarity about what you want to achieve. Picture yourself when you have achieved your goal. Write down in detail what your life will look like when you have it. See yourself doing what needs to be done, appreciate the qualities you have that will make those actions possible, recognise the beliefs you have as the person who achieved that goal – the ones that made the achieving of it possible.

Our brains like a certain future. If you paint a clear target ahead of you to aim for, the brain relaxes, pleased that it’s not setting out into the unknown. Revisit the target in your imagination on a regular basis along the way – just before sleep is a great time to enjoy exploring a future where you have what you’re working toward. And for the rest of the day, just let it go. Trust that your unconscious knows your destination, and that’s it’s already happened, you just haven’t reached that moment in time yet. Then, you perfect a sequence to get you there.

In archery my process is to position my feet in relation to the target, push my bow toward the target as I raise it, drawing the string until it reaches my lips. Sight on the target, and release by expanding my back a fraction to release the string from my fingers. My focus isn’t on hitting the target, it’s following each of those steps perfectly each time. I forget my goal, and concentrate on my process. If I’m being completely honest – and I know you’ll keep this to yourselves – I also imagine I’m Robin of Sherwood from the 80’s TV series (Michael Praed, not Jason Connery). It works for me.

It’s the same with a life goal. Apart from the Robin of Sherwood bit. Work out the steps you need to do every day which, if you keep doing them, will mean you’ll reach your goal.

They’ll usually be quite small things. Every day your target isn’t your target, ticking off the steps you’ve committed to that will get you there is. You see, research has shown that having a goal can reduce your happiness because we’re not really built for delayed gratification. Stepping into a bikini in six months’ time doesn’t carry the same urgent desire as a slice of cheesecake sitting on the table in front of you right now. So we have to use what the brain likes – short term rewards – in order to get what we want. Reward yourself for completing your daily process, and you’ll soon see your target getting closer.

Over the 15 years of running Quest we’ve graduated well over a thousand people who intended to create a successful practice. Some fail to even get the enterprise off the ground. They’ll give many reasons – they just need to do one more course before they’re ready, the economy isn’t right yet, the kids need to be a bit older, they need to have a bit more money behind them – but underneath all the excuses and rationalisations tends to be a unifying thing: fear. A fear of not being good enough, a fear of looking stupid, a fear of failure or even success. The answer is to get some of the therapy they hope to offer others, but it’s often easy to be a stranger to yourself, and attribute the reason for your failure to launch on things in your environment, rather than things within your personality.

So, commonly, people who are scared spend far too much time getting ready. They’ll spend months on business cards, web development, logo design, extra training – lots of things to keep them busy, but not actually doing the one thing that’s going to build your business – seeing clients. I left the police after 18 years’ service to become a full-time hypnotherapist. I spent three years growing my practice in readiness. Looking back now, I was probably ready after 18 months, I was just too scared to jump. I too had lots of reasons for delaying – my kids were young, I was the sole wage-earner, I was divorced, I didn’t know anyone who had done what I was about to, I was very comfortable in my role.

Blah blah blah. In the end I was lucky enough to get a new boss who was so appallingly bad that I recognised I couldn’t spend any longer taking orders from anyone else. I had one more bit of therapy to let go of my fear of failure, and I launched. I bless him for his idiocy regularly, but it shouldn’t have been necessary. I should have trusted myself, and got some therapy sooner.

So my advice is, get ready quickly. Obviously, you need to get things in place to support your goal, but you probably need less than you think. Launch with the bare essentials and a pot of money to fund needs that might arise on the journey, rather than spend the pot on things you might need if certain things happen along the way (which probably won’t).

Rather than targeting your goal like an Archer – ‘Ready, Aim, Fire!’ approach goals like a guided missile does. They use a different principle. They launch at the earliest opportunity – wait to be sure and the variables increase – and then adjust their aim along the way.

Once my arrow is launched I have no control over it when a gust of unexpected wind blows it off course. With a missile, its on-board satnav makes adjustments to bring it back toward its target. Ready Fire! Aim is by far a better way of reaching the target – and we have the best on-board computer in the universe at our disposal – our brain

That sequence is much more like real life when you’re aiming at a goal you want to achieve, such as building a business. You have to launch it as soon as you can to begin the journey, so get Ready, and Fire! Along the way to the goal you’ve visualized, things are bound to happen that will necessitate an adjustment, they always do. If bumps are expected – even if their nature is unforeseen, then you’re not being knocked off course, they’re just a part of the process. Deal with it, and re- aim. You’re always where you’re supposed to be, the question is simply, ‘is my process still what is required to get me to my target?’ If the answer is yes, great, keep on keeping on. If it’s not, adjust your process, and keep on adjusting until you’re happy your aim is true again.

So, much as I love shooting a bow, when it comes to striving for a goal, be a Missile Launcher, not an Archer.

Will Smith – The Secrets To Success

Below is a You Tube video that offers a collection of interview moments with Will Smith on the secrets to success. I hope it inspires you to take action – Ready Fire Aim!

Browse for a Quest Cognitive Hypnotherapist

This website uses cookies to improve your experience while you navigate through the website. Out of these cookies, the cookies that are categorized as necessary are stored on your browser as they are essential for the working of basic functionalities of the website. We also use third-party cookies that help us analyze and understand how you use this website. These cookies will be stored in your browser only with your consent. You also have the option to opt-out of these cookies. But opting out of some of these cookies may have an effect on your browsing experience.
Necessary Always Enabled
Necessary cookies are absolutely essential for the website to function properly. This category only includes cookies that ensures basic functionalities and security features of the website. These cookies do not store any personal information.
Functional
Functional cookies help to perform certain functionalities like sharing the content of the website on social media platforms, collect feedbacks, and other third-party features.
Performance
Performance cookies are used to understand and analyze the key performance indexes of the website which helps in delivering a better user experience for the visitors.
Analytics
Analytical cookies are used to understand how visitors interact with the website. These cookies help provide information on metrics the number of visitors, bounce rate, traffic source, etc.
Advertisement
Advertisement cookies are used to provide visitors with relevant ads and marketing campaigns. These cookies track visitors across websites and collect information to provide customized ads.
Others
Other uncategorized cookies are those that are being analyzed and have not been classified into a category as yet.
SAVE & ACCEPT
Powered by